How do you feel about ice cream in colder weather? What about seasonal types such as candy cane pieces swirled through vanilla, or rich eggnog ice cream?

And fall flavours? Pumpkin and cinnamon?

What about this: an apple pie milkshake with crumble topping?!

Give it a shot before you go all in with the holiday season; If you have a blender you can make this taste of autumn at home. You’ll need:

I don’t usually have apple sauce unless I’ve made some for my kids – and then it’s gone because they’ve eaten it – or for latke season.

But I had a couple apples left from our trip to the orchard earlier this season that were not too pretty, but still good enough to eat; I wanted to use them up rather than waste.

I got to thinking about how to use them; there were only two so baking was out unless I made an applesauce and turned that into an applesauce cake or used it for muffins. Which I didn’t want.

A smoothie seemed like a good idea in theory but it also sounded… not quite delicious.

A milkshake though? Somehow better! Probably the ice cream vs yogurt.

So, after peeling the not beautiful apples and cutting away the blemishes, I made a quick apple sauce and cooled it. Then drink time. 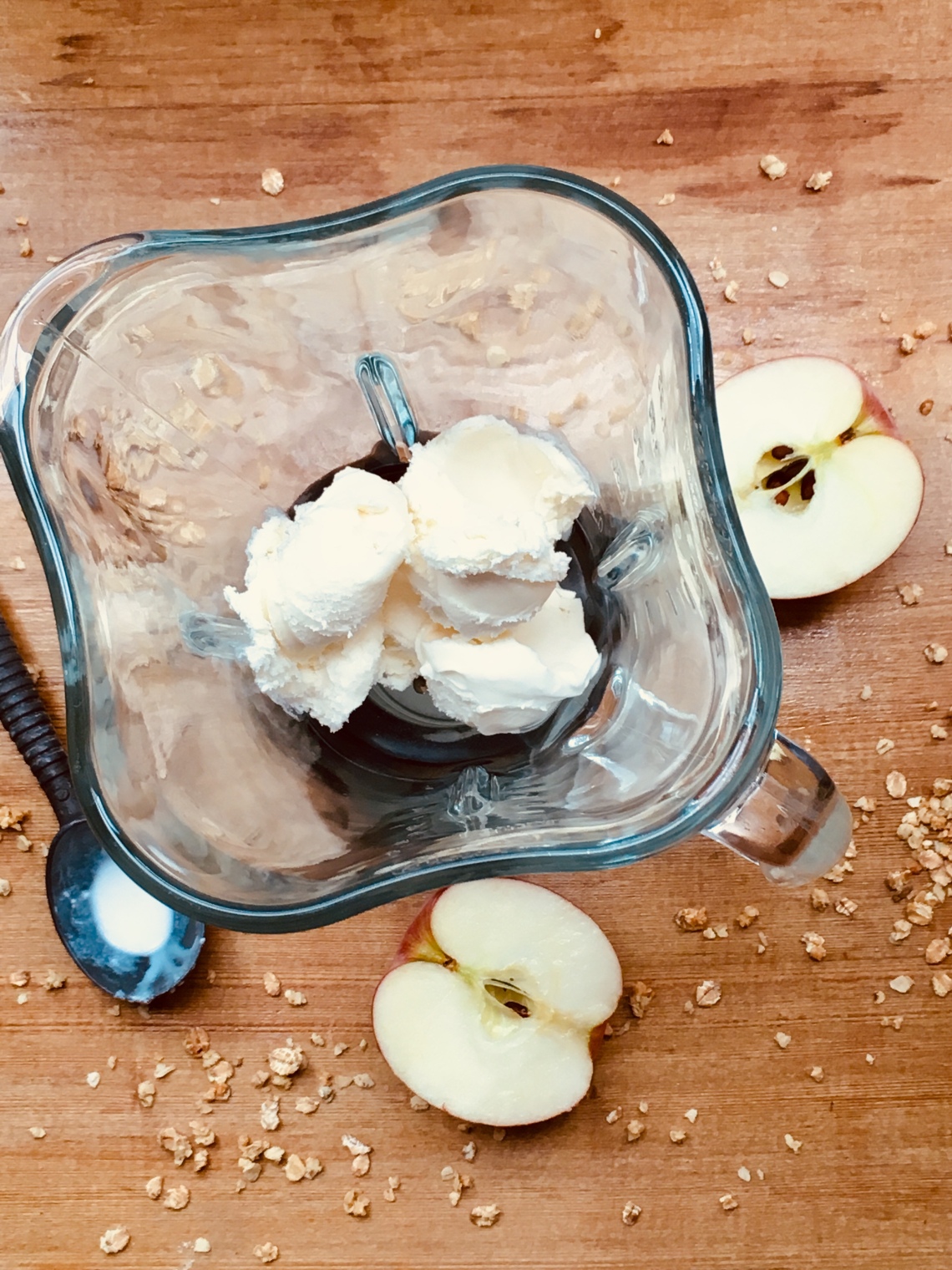 Here’s what to do:

Put 2 large scoops of ice cream into the blender with 1/2 cup of applesauce and spices. (1/4 tsp cinnamon and a pinch of nutmeg). And milk to thin the ice cream as it’s mixing, about 1/4 cup, maybe more, and a little granola if you want it. I added only a tablespoon or so.

Blend it all to combine everything and get it as thin as you like by adding more milk; top with a little more granola pieces. Perfect.

And about the “(vanilla) ice cream”… I used vanilla because it seemed the cleanest, if you know what I mean. Simple. Almost plain. A very basic flavour to let the apple and spice shine.

But… I think others would work here, too, if you don’t go overboard with flavours.

Maple walnut would probably work. Butterscotch ripple. Maybe coconut? Apple-cinnamon is the idea so if you use a different ice cream base just keep in mind not to over do the number of flavours.

In which case you should probably break up some graham crackers to go with that.

Let me know if you do.