I always catch the holiday spirit early. The colder weather means I’m ready to bake cookies and set up the table with cups of coloured icing and little dishes of sprinkles. I want to put our simple wreath outside before it’s too cold, and listen to holiday music in the car.

But it’s usually too early, and I have to tell myself to simmer down, it’s not even December yet! Then, because I keep reminding myself to wait, sometimes I wait too long and suddenly Christmas is next week and we have no tree. (Though we do have cookies.)

We also celebrate Hanukah at our house, but somehow that doesn’t seem to creep up the same way. Though we’re not reminded of the approaching holiday at every store we visit from Halloween on, we always remember to buy more candles for the menorah. And my husband and son light them each night.

I like to host a dinner with family just so we can make a huge batch of latkes. The menu is built around latkes and cookies, adding something like soup in between so we can call it a meal.

But for either holiday, celebrated early or not, we have our favorite treats. Read: baking.

You get the idea. (the * recipes are at the end of the post)

One year I made some delicious chocolate cookies that had about a hundred steps, very soft dough and the ability to disappear instantly once set out on the table. Some years I talk my mother into making the nut crescents – almond! – because hers always turn out best. And many Decembers I try a new recipe so our family has some variety as well as tradition.

But every year I make fruit and nut crostini.

The recipe comes from Canadian Living magazine; I’ve followed the recipe exactly, and the crostini were delicious, but have also made some adjustments that I think of as improvements: 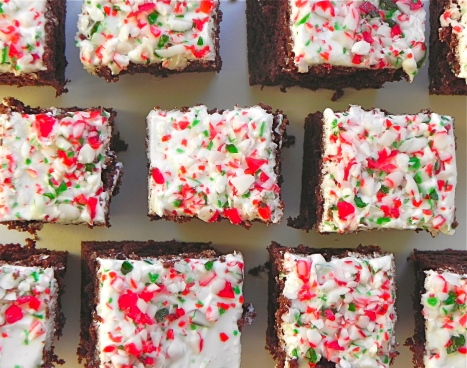 Beat butter and brown sugar together. Add molasses and mix gently, then add the ginger and egg. Mix well. Add remaining ingredients, except granulated sugar, and stir until combined. Refrigerate 1 hour or more.

Once cool, form dough into 1-inch balls and then roll in granulated sugar.

These brownies really walk a line between brownies and cake. I usually cut them into small squares and treat them as brownies, but if you want bigger slices, just call it cake.

Beat the sugar and eggs together; add the cocoa and mix until smooth. Mix in the oil, milk and mint extract; Finally add the flour and soda, and mix until well combined. Bake in a parchment lined (or buttered) 9×13” pan at 350 for 25 minutes, or until cooked through in the centre.

You can also bake the batter in a 9” round pan, instead, but the round pan will take longer to bake. Check at 30 minutes, but it may need more time.

Beat the egg white and icing sugar well, until smooth. Spread a thin layer over the cooled brownies (or cake) and sprinkle with the crushed candy cane.

Any extra icing is good for decorating cookies with, as it will harden in time, which you generally want for making sprinkles stick to butter cookies.

Sometime over our winter break we had cupcakes… I think for New Year’s Eve. We used the extra batter for a little single-layer 6” cake. I split it and spread with a little jam then we topped it with the remaining buttercream and - of course- rainbow sprinkles. Perfect! #leftovercakebatter
Look at this beautiful frost on the window!! And a little frothy milk, for a warm breakfast. (More frosty shots in my story today)
I’ve been trying homemade non-dairy milks for awhile… the last one I had on the go was cashew milk; these are oat milk and hemp milk. Which milk alternative do you reach for?
Winter break French toast… everyone is sleeping late and eating late.
Happy New Year’s Eve!
Christmas cinnamon buns… a little different every year, but we still have them every year. This batch was on Boxing Day. Merry Christmas.
Loading Comments...